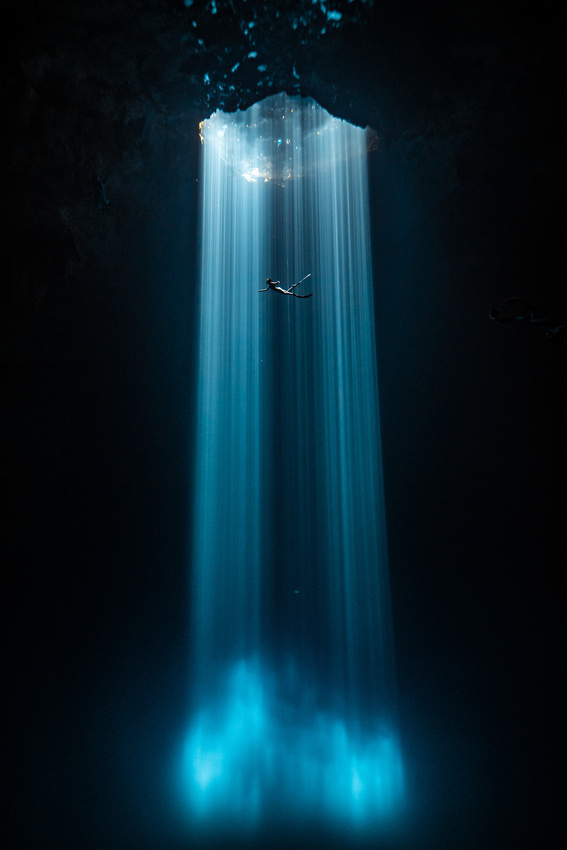 April was a dream come true - or dreams come true. Mexico had been high on my bucket list for a long time, and in April we'd finally go there. It was a rare occasion where i wouldn't be there to photograph a competition, so i would have time to work on other projects. I was dreaming big, but keeping my hopes small - i knew i'd be very satisfied with just the experience itself, a nice burrito, and maybe one of those shots of a person in a light ray. The dream scenario would be to come away with 3 movies and a bunch of photos, but i knew that would be a bit over-ambitious. Especially since what i had in my head - 3 very different movies with 3 very different freedivers - wasn't going to be that easy to film to begin with.

But then again, i have amazing friends. Anna Von Boetticher was coming with us, and we had been talking about making something atmospheric. Anna and i work very well together, as she understands the camera and edits quite well, and she can do amazing things without needing many takes. So i figured we'd have a decent chance of making something good. And Sofía Gómez Uribe would join us a few days later, with whom i would do a follow up to our 'Sofia rocks' video, which was going to be more of an action flick - think underwater parkour. We didn't know what we'd encounter, so they'd be hard shots to plan, but we're both fine with improvising on the spot. Plus we'd get Camila Jaber visiting us in her home country, and with her i wanted to film something more about the ecology and unique beauty of the environment. I'd worked with Cami before and knew how well she'd embody the spirit of the cenotes. And with my girl Georgina there, and Matt and Kiki providing logistical support and safety, there was a small chance it could actually all work.

Turned out i came back with 4 movies, and more photos then i could have hoped for. The cenotes exceeded my highest hopes, they were so brilliantly beautiful and diverse, that after 2 days i started getting butterflies every time we went to visit a new one. I was completely in love with their magic, with how unpredictable their beauty was; you could not tell from the surface what you were going to experience underwater. It was thrilling to have these surprises, Like on one of the first days, when we went to Angelita, and a baby alligator took a shine to Anna:

Of course that wasn't planned, but when it happens, you just giggle and feel grateful, and roll camera.

In that very same cenote, Anna and i filmed some of the most misty gorgeous footage i've ever shot. Anna wanted to do a piece where she'd come out of the halocline at 26 meters deep, swim around the tree, and return back into the halocline (as you do). I was a bit nervous about that, as i always am when i am going to film deep, also because it would mean i'd have to film something i couldn't see: Anna would pop up somewhere from the 'mist', and it was not possible to predict where. But it worked:

Every cenote we visited, Sofia and i scouted for stuff to jump from, run past, hang from. We always checked with local guides what was ok to touch and what wasn't, since some of these environments are quite fragile. Others have been dived and snorkeled for years without problem, so we listened to the experts. There was one sequence, though, somewhere in the middle of our trip, we knew we had the In the ending of our movie, and that we were onto something. i had more footage than i knew what to do with, and it was a tricky film to edit, but i love how energetic it turned out:

We met Camila outside of Cenote Maravilla - which turned out to be my favourite (i love them all, but if you were to twist my hand i'd scream "maravilla" within a second or 2). She had a few days with us, then had to go back to college to be very smart, then came and joined us for a few days again. We had discussed this idea i had, of her being Cenote, showing her in all these different cenotes, to show that they're all connected, and then showing her in trouble. Camila had brought a traditional Mexican dress with her, which was just perfect, and soon as we filmed the first scene (also the first scene in the movie), i knew we had something special. Camila did beautiful work, and even brought the tape we used in the last scene. When it came to the ending, i wasn't sure how to do that last scene, but then Anna said: "She's been coming up in all the sequences so far, right? Why doesn't she sink out of frame in this one?" Simply perfect, and that's what we shot.

When it came to editing 'I am Cenote', i was struggling to find the right music, but as luck would have it, on that very day (!) i get an e-mail from a fellow freediver, who is also a composer, looking for material to write a piece to that he'll graduate with. Iván Rodríguez Expósito turns out to be a fantastic composer, and his rough draft is pure beauty. What's even better, as this will be his final piece for his degree, he'll get to record it with lve instruments in a professional studio, one of the best in Europe. The score is magnificent, and Camila manages to also get studio time in Mexico to record her voice over, which Iván then mixes into his track. The end result is more than i could have ever hoped for - much like the trip to Mexico has been. All thanks to really good friends - and really good burritos.