'A cup of tea' was an idea that had been floating around in my head for about 5 years. It started with Beci Ryan, a friend who can do remarkable things. We were in a pool in London, must have been 2014, and i think i asked her if she could do a lotus upside down. Normally i don't ask people to go upside down underwater without a mask on, as it floods their sinuses, which is very uncomfortable and makes most people's faces scrunch up. But Beci could not only do a lotus upside down, she could also keep a straight face while doing so, without a mask. Then i started thinking, as i knew she was a trained mime, that we might be able to use these abilities to shoot something quite quirky - an underwater mime video, in which we simply see her drink a cup of tea, but the tea is air.

As i discussed it with Beci, the idea grew a bit; something with a picnic basket, maybe the teapot could float up. All the ideas were about how inverting yourself underwater could help us mess with gravity. But we would need access to a pool for a bit longer than an hour - i figured a few days with a few hours each day might do - so we put it on a back burner. Every once in a while we'd discuss it, and i would go back to the idea to see how i would do it; there was something about it that tickled not just my funny bone, but also my inner technician - it would be a tricky shoot.

Then luck came around and nudged us closer: the dive centre that we operate our school out of, Porthkerris Divers, had built a pool. 5 minutes from where we live, with a shallow end and a fairly deep end, and the minute i swim in it and slide down the transition between shallow and deep, i know - this is where we can shoot 'a cup of tea'. And it turns out Beci can take some time off to visit in August. So i go online and start collecting all the props; i find a wicker basket, a picnic blanket, and together with Beci we pick a dress, and i find a teapot and cup that matches the dress. It all starts coming in and my excitement grows; i'm getting those nice nerves.

Beci comes down and we agree: it's going to be a difficult shoot, so let's just try, have fun and allow it to fail. So many of the shots i have in mind are going to be hard, so many of the things Beci will have to do will be insanely difficult, and she'll have to make it seem effortless - and that's just the problems we can foresee. During the shoot other stuff will pop up, we know. But as it turns out, the hardest thing to do was to have the blanket straight on the surface - it behaved beautifully at the bottom, but we needed it at the surface too and that was a bitch and a half to accomplish. Beci was utterly brilliant: she only struggled with the slide in the beginning, but after a few tries she nailed it, and everything else she tried, she usually didn't need more than one or two takes. Even the shot i thought was going to be almost impossible, where i turn the camera with her as she rotates 180 degrees, we got in 2 takes! In the end, we shot over 3 days, 2 sessions per day, as the pool isn't super warm and poor Bec started shivering after about an hour in there, so about 6 hours total.

In retrospect, i should have gone with artificial light rather than natural, as it would have made for a more even colour palette in post (damn that was a hard thing to grade! I couldn't quite get it right in the end), and maybe another day to shoot with an additional lens would have been nice, but overall, i'm very happy with the film. It's quirkier than anything i'd done, and i was a bit hesitant to put out something so different from my usual work, but it still makes me giggle - especially when Beci spreads the blanket and it flows up.

Plus it shows the potential of that pool as a studio - we had moments there when the light came through that were just magic. I'm planning to do a lot more there - hopefully also with Beci, soon as her sinuses have forgiven me. 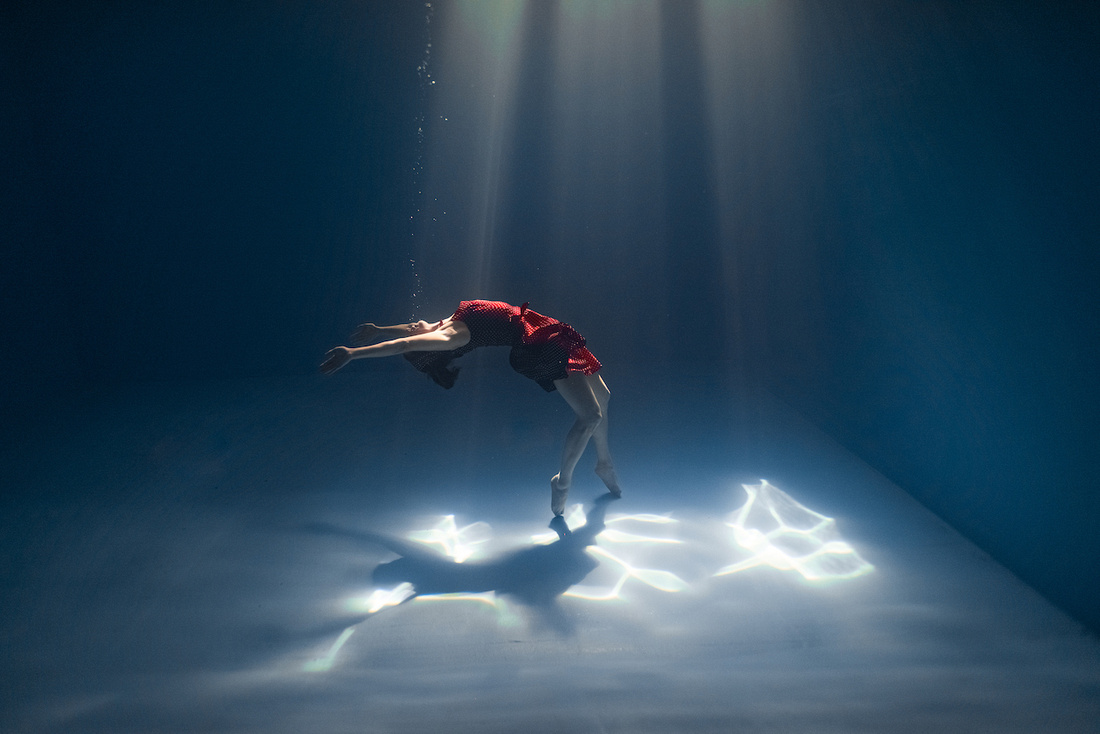