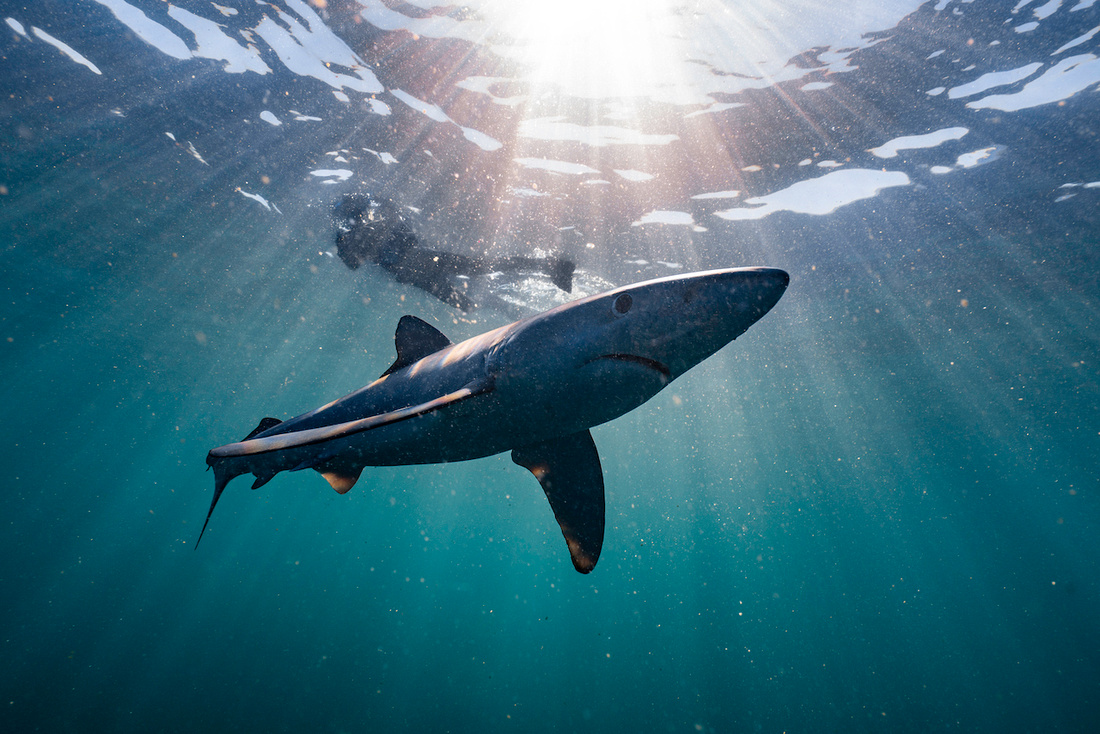 Wildlife trips are interesting beasts themselves: like the animals you hope to encounter, they are, well, wild, which is to say, often boring. A lot of the time is just a matter of waiting, innit, and then it's a matter of having good company, and maybe a comfortable place to stay. In September i was invited to go on a blue shark trip with our friends at Porthkerris Dive Centre, so of course i said yes. Blue shark trips can be difficult, as it's a big sea out there and there's a very particular knack to finding sharks, plus spending hours on potentially rough waters can become quite vomit-y, but Porthkerris have a lovely cat, the Celtic Cat, which is very comfortable. 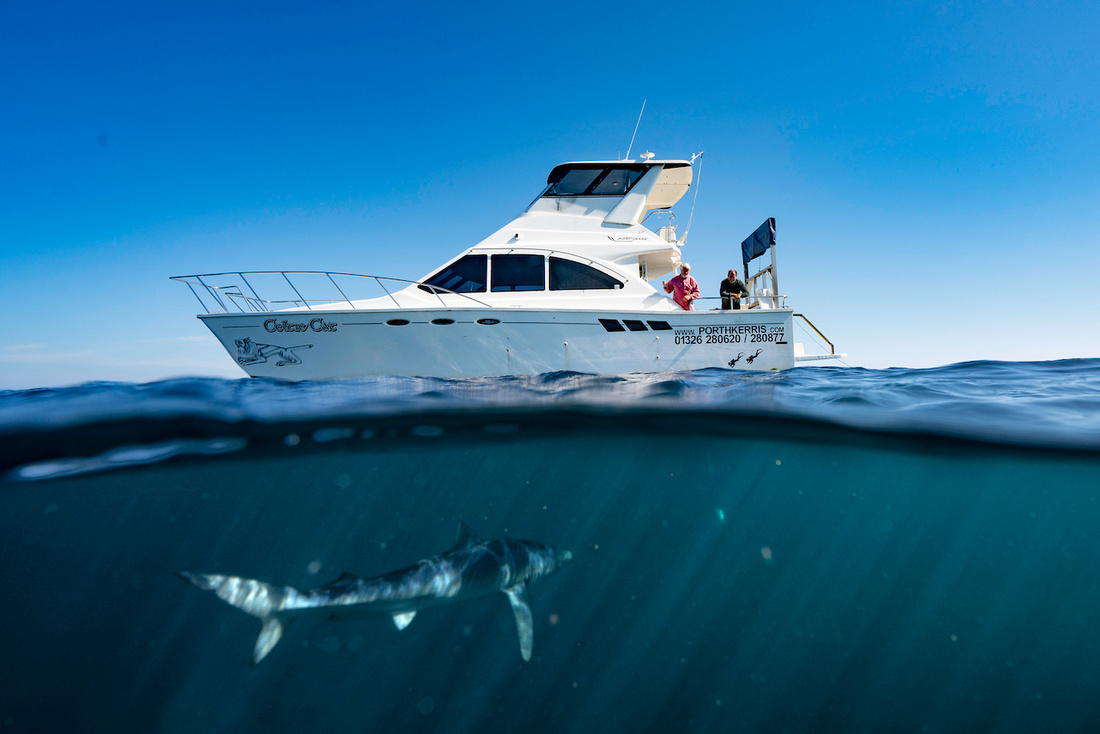 Plus blue sharks are so gorgeous that even a remote chance of seeing them is worth hours of potential boredom and possible puke. The Cornish sea is one of the few places in the world where you can swim with them, and we've been doing it for a few years now. Every time it strikes me not just how beautiful that blue is, but also how fascinating their behaviour: most sharks are really shy and won't come near divers, and the ones that will approach you are the ones that you have to be quite careful of, like Tiger sharks. Completely possible to swim with, but not for beginners. Blue sharks, however, are almost indifferent to you - as long as there's easy fish in the area, they'll stick around, and you can get quite close without them getting spooked. And i've never seen them show any sign of aggression - they've never spooked me. They don't seem like they feel threatened and they don't pose a threat. Perfect shark to swim with, beautiful and safe. 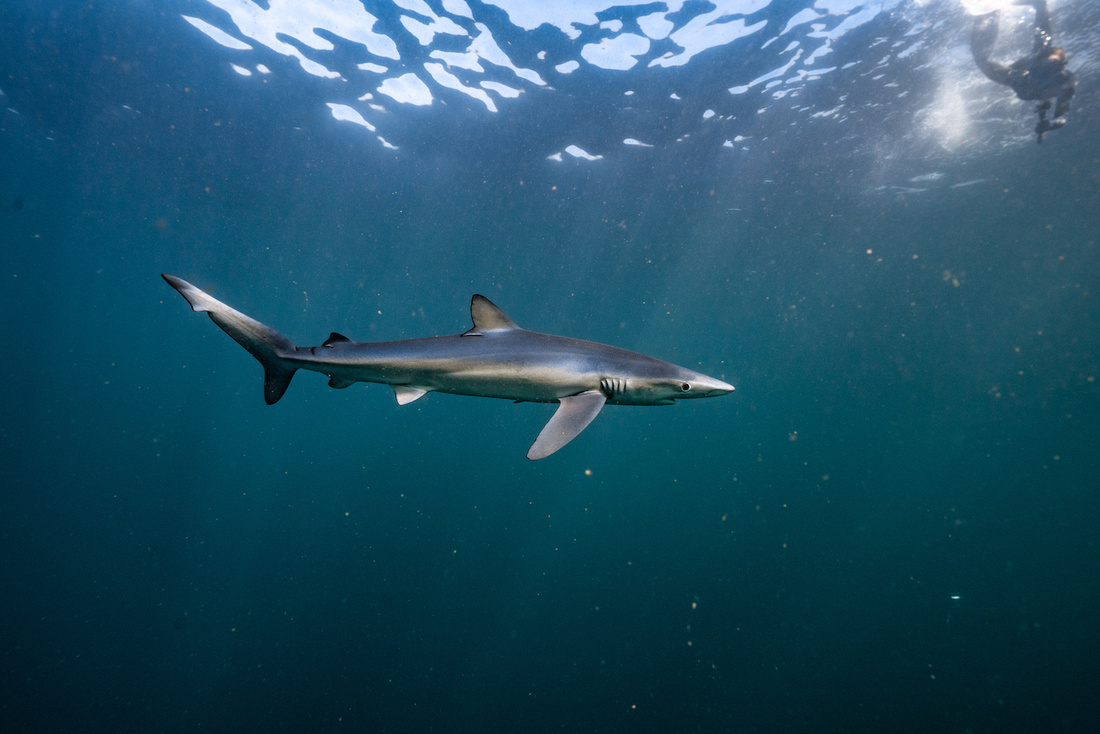 So it was fine that there were some total beginners with us, who had never seen sharks before. We also had a few photographers there, which made the ride over and the wait all very pleasant and fun. Soon as the first shark was spotted, we got geared up and i figured to let an experienced guy who'd never swum with blues before go in with some beginners first, so i waited a bit, but the shark stuck around, so then it was fine for more people to go into the water as well. I had a few photos in mind, but with wildlife, you shouldn't hold on to plans too tightly. One of the shots i had in mind i knew was a bit folly: i wanted a half above, half below shot of the boat and a shark underneath. Not only would that require the shark to be in the right position (tricky to coordinate as they don't really listen), but also for the sea to be quite flat (similarly tricky to arrange). So i knew i had about a 2% chance of getting that shot, but i wanted to give it a go anyway. The thrill of getting quite close to achieving it alone was worth the attempt, and after 4 attempts, i actually got the shot.

The other shot i was hoping for would require a bit of trust between me and the shark: i wanted to get underneath the shark to get a profile shot from below, shooting up. I'd done a few dives with the beast, and it appeared that it was not perturbed by me, so i timed my next dive so that i would be deeper than it when it got close. The shark didn't deviate from its course and i got a shot - but i'm not entirely happy with it as the focus went a bit wrong and i got mostly particles rather than beast: 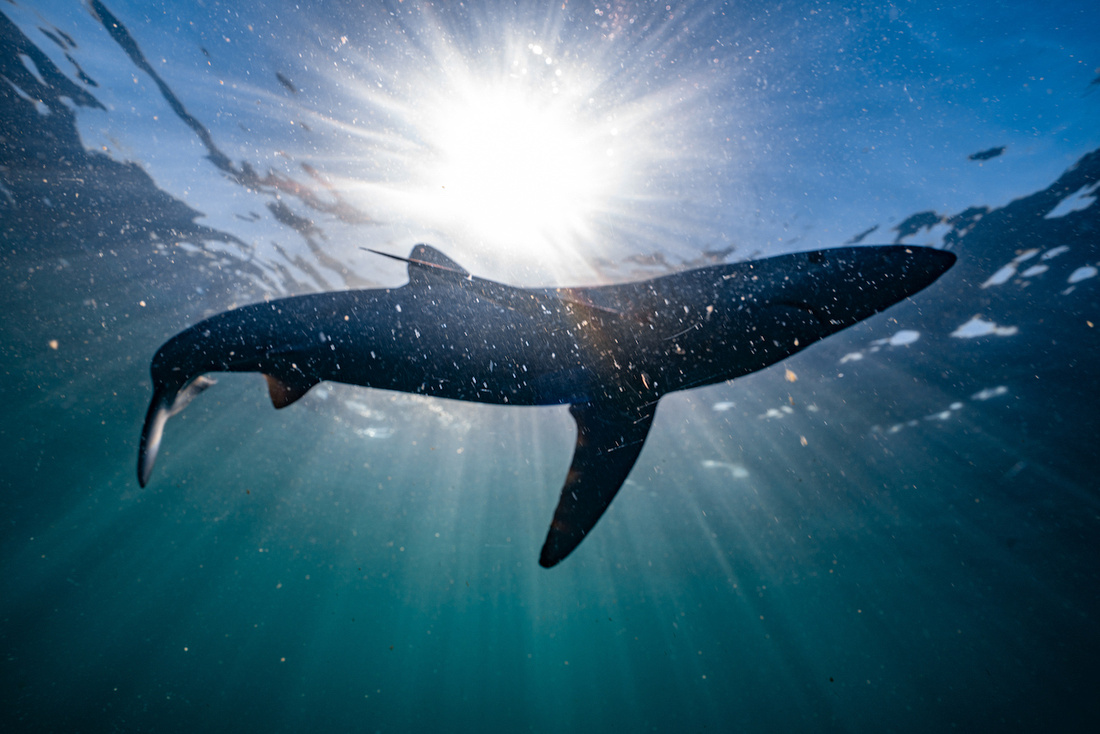 Can't win them all. I was running a Gopro and a insta360 camera at the same time, so i was hoping for better results from them, but the framing in the Gopro was a bit off, and the 360 camera was in weird settings, which meant that in post, i couldn't frame it so that you got the right - but i kinda liked what i got there anyway: 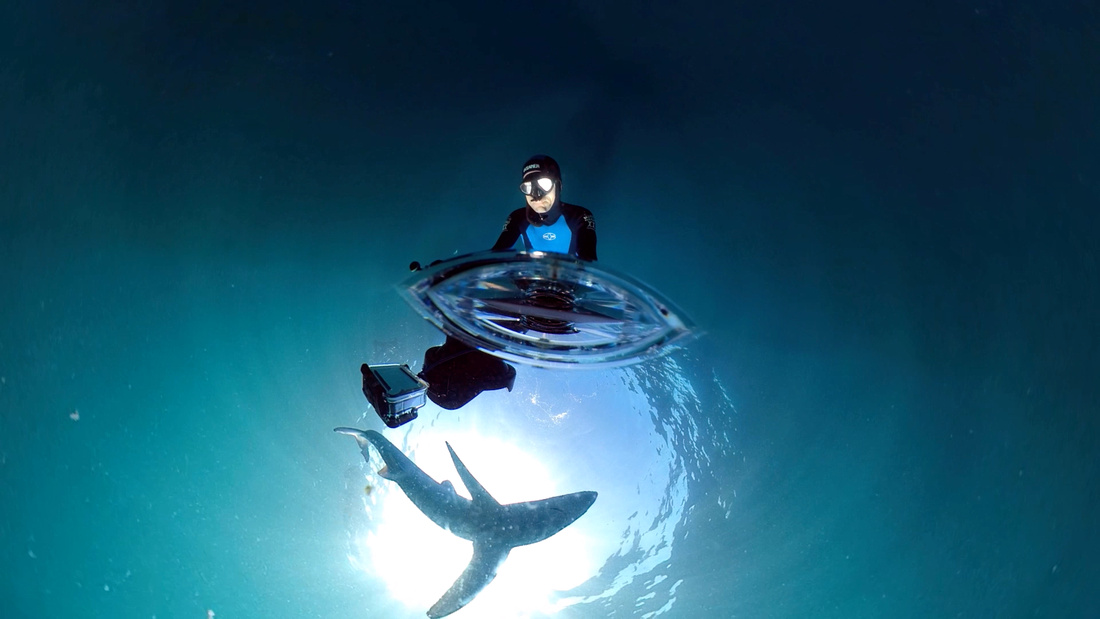 and despite that i was there for photos, going over the videos i was happy enough with it to make one

I think it's important to show how peaceful and beautiful these encounters can be, as sharks are still maligned, and i think their portrayal in the media contributes to the general apathy people have towards sharks' endangerment. Many species of sharks are in real trouble, due to being by-catch in huge fishing nets, but also being actively hunted for their fins. A cuter fish, or an animal with a friendlier reputation, might get more attention for protection, but sharks are seen as monsters, our enemy. Very few people would want to protect a monster, would think it necessary. Of course, they are not monsters, and very much need our help. Interactions like we had in September, and the pictures we got from it, hopefully help to change the narrative, and raise awareness to the plight of sharks. More information on the conservation of sharks can be found at the Bite Back website. 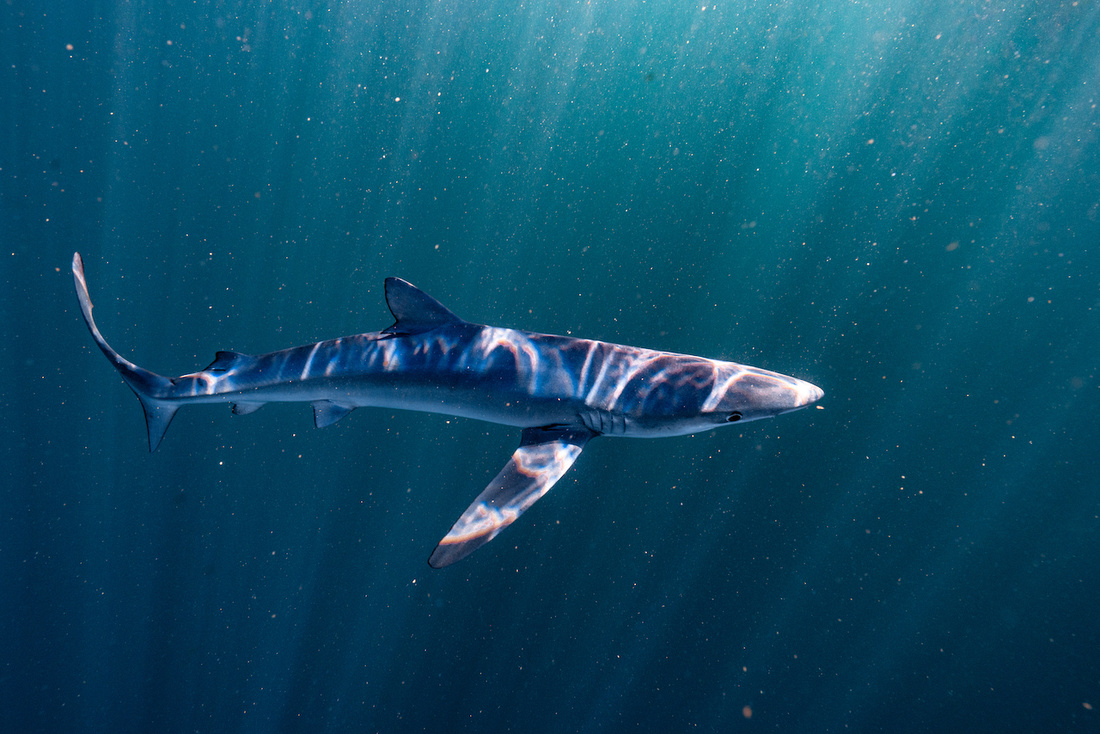